Communication for Development: Where’s the Love? 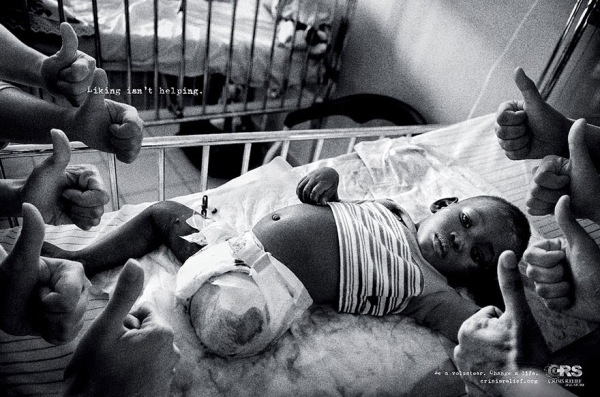 Some weeks back, I caught a glimpse of the above advertisement in an excellent post at Geopatra’s blog. It’s brief and to-the-point. Even witty.

The ad recognizes the good you want to do. Your volunteering spirit. Your altruistic inner beast. But it also tries to point out the futility, even stupidity, of your clicktivism. The ‘key message’ from the creative brief could well have been, “it’s extremely idiotic to give thumbs ups to African children with limbs blown off. Really? Give it to us: we’re the Merchants of Charity.” (you can have that one for free *Merchants of Charity* – you next, big NGO-donor hybrid). It’s guilty of being too self-absorbed. But worse, it engages in clicktivist-shaming. And that concerns 98% of us.

The question for behavior change professionals is: will a shaming approach really prompt people to action? From the advert above, we can tell that it already assumes that its audience is aware of the issue (say, children injured by landmines) and is also acting to change the situation. They may just be taking a wrong route to it.

While I do not thinking shaming is the way to go – I want to take a minute and appreciate the fact that this ad aims for an emotional response. I will argue that this is one key thing that Crisis Relief got right. They, or their agency Publicis, recognized that for an audience that’s largely aware, an emotional response is only a requisite for behavior change.

The above is a recognition that is crucially missing in Bangladesh’s social & development communications. Walking along the trail of earlier information-awareness focused models, many practitioners (and approval authorities) have failed to acknowledge the indispensability of emotional approaches to Behavior Change.

The result is an abundance of information in BCC materials that is neither fully understood nor fully retained by target audiences. In the posters / fliers to the Left, mostly from the 1980s, we notice a distinct IEC approach. Notwithstanding the attempt to create a notion of ‘an affectionate father’ in a nation where Fathers are the strong & silent type – there seems to be a lot of information to retain.

There’s a stark lack of understanding of, and experience with, the very people we’re trying to reach. Reducing the people we’re trying to engage to ‘Target Audience’ can pose a challenge. Target Audiences are often defined in terms of their average age, income, expenditure, calorie consumption or education level. Yet, often we forget, or neglect, to consider the values, sentiments, aspirations and dreams of our audience. Do they care about the economy? Do they view more children as a sign of prosperity? Would they migrate to towns if they could? Does the Environment concern them on a personal level? 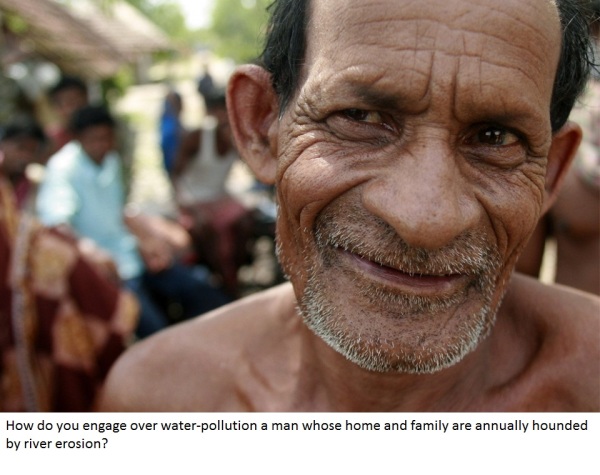 Stories, songs, music and colors – the creative side of communications – is often buried under ridiculous jargons, gender-sensitive language and obscure politically-correct terms. Evoking emotional responses ranks very low in the list of communicators’ priorities. I won’t deny that sometimes excessive information stems from voluminous, unending Terms of References. Or, ironically, briefs. And these, in turn, are products of hybrid teams that consist of everyone starting from the Project Directors, Nutrition Experts, Sanitation Experts, field staff and overseas consultants. Each working with his/her own agenda, fills up the communication brief / TOR with technical information that they want to teach / preach. It is in this whirlwind of agendas that ’emotions’ get lost.

‘Recognition’ may be a better incentive than ‘subsidized HIV tests’. ‘Fear of Emasculation’ may be a bigger deterrent to vasectomies than the ‘Cost of the Procedure’. “Living with malnutrition’ is better than ‘admission of malnutrition’. ‘Allegiance to political dynasties’ trumps ‘citizen charters’. – Such emotional responses are vital to recognize, especially for a country as irrational and as traditional as Bangladesh. People need emotional incentives to change the way the behave, and have been behaving for generations. And communicators’ first task is to understand the human beings behind the demographic data.