These days, if you’re a journalist or a reporter …reporting the news is just not good enough. You need ‘news that sells’. So, sometimes you have to invent angles and embellish details.

Covering UK’s ‘Visit My Mosque’ Day, Ms. Newman attempted to go into a mosque and was ‘ushered out’ of the facility. Shocked, she did what any of us would do: take to social media for a good, ol’ rant. 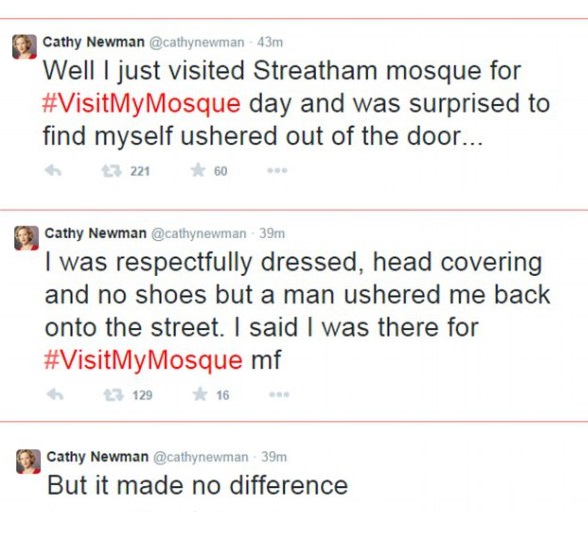 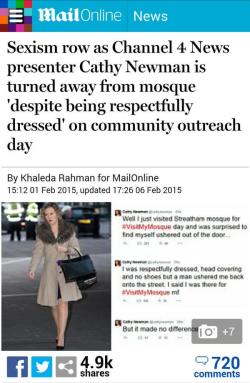 Her tweets were retweeted hundreds of times. News outlets picked up the story. And let’s not forget Ms. Newman alone has around 80K followers, all of whom saw exactly how suspicious these mosques were …denying entry and ushering out a journalist of such high standing. ‘Visit My Mosque Day was such a fail!’ some commented. Some probably wondered what these mosques were hiding and why Muslims were so rude, uncivilized and barbaric even.

But then, a CCTV footage surfaced.

She hadn’t been ushered out at all (perhaps, she misremembered?)

Of course, Mrs Newman had arrived at the wrong location as she attempted to take part in Visit My Mosque day. Rather than being hurried to the door, she had simply been pointed in the right direction by Muslims and left to make her own way out. That is hardly ushering. And saying that isn’t splitting hairs.

Mrs Newman last night apologized for causing any ‘misunderstanding’ over the visit. It comes a little too late for the Islamic centre at the centre of the claims, which has received a torrent of online abuse and two telephone death threats.

I wonder if an apology suffices for turning a helpful direction into ‘ushering out’. Any decent human being would think twice before posting tweets with incendiary intentions. A reporter – whose very profession is supposed to be verifying and establishing the Truth –  would’ve done well to remember that. In the end, all Visit My Mosque related stories are now linked to Ms. Newman (Google ‘Visit My Mosque’ and see how many links are really about Cathy Newman and her moronic gaffe). She has successfully stolen the story and made it about her.

The #VisitMyMosque campaign, organized by the Muslim Council of Britain (MCB), is part of a 2015 effort to reach out to the public and relieve heightened tensions between communities. Members of the Muslim community “may be on hand to answer questions about Muslims and Islam where this is possible,” the MCB said.