What ‘Syria’ Says About Everyone Else

I don’t buy the idea that there’s a ‘Muslim world’ anymore. What ‘Muslim world’? There’s just a bunch of nation-states who happen to have Muslim majority populations. But apart from that – their form and manner of government, social justice, foreign policy, allegiances …everything is unique. That’s why, West Pakistan – with US blessings – led a massacre in the East (now Bangladesh), Saddam asked the USA for help in fighting Iran, Saudi Arabia financed the First Gulf War and is now supporting a strike on Syria. According to John Kerry, Arab countries have even agreed to pay for a Syrian strike. Every so-called Muslim nation has its own horse in the global power-race.

But the common people are different. An invisible film of empathy envelops most of us. I won’t deny that some of this affinity is rooted in ethnic identities (i.e. African, Arab, Indian, Malay), some of it in support for the Underdog and much of it in cultural commonalities. Together with religion, these factors encircle Muslims in a gossamer webbing that defies logic, reason and/or politics. This entire living, breathing organism that is the Muslim people – grimaces and cringes every time a part of it comes under attack; mostly if it’s the West / USA (we’re amenable to allowing intra-Muslim conflicts to run their natural course). Don’t think its only the fundamentalist-Allahu-Akbar types who resent endless US attacks – even the Secular, the Atheist, the Debauched, the Liberals, the Western-educated, the Hipster, the Goth – feel the pinch every time a Muslim country is invaded or bombed. As I said, it defies logic.

For the last week or so – I’ve tried to note general sentiments surrounding a US attack on Syria. family, friends and colleagues have been talking endlessly about it Syria. ‘Who do they think they are’ response was most common. One colleague resorted to faith and mentioned the Hadith of Najd, special standing of Bilad al Shaam and the emergence of the Mahdi from Syria. Contrary to my beliefs, many tea-stall conversations pointed towards the inevitable Christian-Muslim war. A friend joked about the now-viral meme about US intervention in Syria: 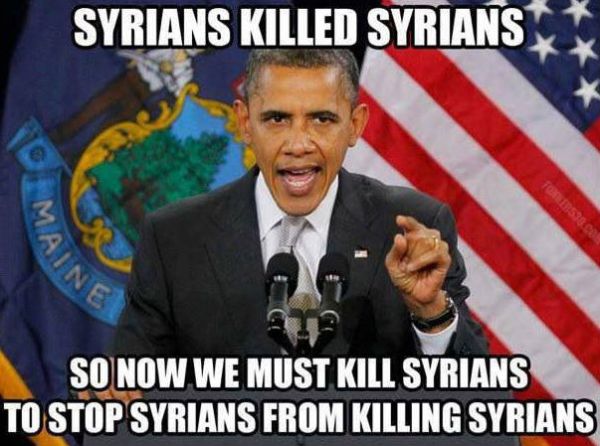 Indeed, Muslims still have little recourse but to mock American war-mongering with memes and sarcasm. But the hurt inflicted by rising drums of war and the very possibility of strike – is very real. It will pile up on that caused by the futile wars and massacres in Iraq and Afghanistan. We may, ourselves, condemn Al Qaeda / Afghan Islamists – but it’s not without the knowledge that it was the USA that trained, armed and supported them in 1979. We may, ourselves, disapprove of the Muslim Brotherhood – but it’s not without remembering that it was born out of English colonialism and is still being armed and financed in Syria today.

In short, the general sentiment seems to be that only if the USA and its allies would stop invading, bombing and killing – things would cool down. I mean, really! Who hates Freedom, Miley Cyrus or beer enough to physically fight it? But imagine if I were to invade your country, bomb your neighborhood into smithereens, cherry-pick a puppet autocrat to rule you and boastfully patrol the streets in APCs. What would you do? Any human being – white, black, gay, straight, atheist, believer, monogamist, lover of Breaking Bad, hater of Nicholas Cage – everyone – would (secretly or otherwise) long for vengeance. We’d rationalize it, in retrospect, in the name of religion – but we’d be kidding ourselves. Truth is: what goes around, comes around.

Of course, on the western half of the world, no government usually cares about what Easterners think. Not a single fuck is given that there’s no national security threat, no provocation, no strategic objective – only blueprints for strikes. While the politicians mull over the Legality and Economic Feasibility of such a strike – no one wants to know about the Morality of it. No one cares that every single one of these wars will have their consequences – today or twenty years later. The thinking must be that scapegoating middle-eastern dictators is all too easy – and quite a few will line up to fall on the sword when the time comes. Root causes of anti-US sentiments, hatred and terrorism are not important – as long as there’s someone to blame it on; that and sadly pondering ‘why they hate our Freedom’.

Before citizens could think about how they feel about Syria, David Cameron was going ahead with a vote on ‘response’. The same thing happened just after 9/11. Before anyone could digest that the orchestrator of the attacks was a Saudi trained by the US operating out of Afghanistan – the ‘response’ against Iraq had been determined. Typically, this shifts the debate from ‘if’ a response is called for – to ‘what’ response will be best. It helps bypass the ‘why’.

Regarding Syria, US citizens seem to feel differently than their government. A Reuters survey shows that only 19% of Americans supported a strike on Syria. Roughly 56% opposed it. But since when have the people mattered in the matters of war? What matters is private groups, media and lobbies who know very well that they stand to gain financially or geopolitically. That is precisely why the war drums won’t quiet down. In Foreign Policy magazine, a reader going by ‘jtkubs’ wrote the following:

The single biggest pathology in the discourse over what the US should do in Syria is the universally flawed understanding of the term “power.” What the US has the power to prevent, achieve, or enforce in Syria is wildly overstated or oversimplified as any military planner contemplating the issue will tell you. We aren’t “letting innocent people die.” People are dying in a war that is not ours…it has happened before and will happen again. The grossly exaggerated sense of American power hinges on our axiomatic resort to flexing military muscle to symbolize our greatness. Is that all we are? You don’t have to be an American Declinist to understand that a leader with only one way to demonstrate leadership is a failure. Blowing things up and toppling despots in not the acme of leadership. I hold out hope for the day that the debate returns to an understanding of American greatness being spoken of in terms of its principled, reasoned leadership; a leadership that refrains from pouring gas onto already burning fires by threatening to strike with its overweening military prowess, and instead exercises a range of leadership skills that can compel, at a minimum, the American people and like-minded democracies to follow.

Most annoying is the dallying over the so-called ‘Red Line’. Assad used chemical weapons! As if it killed more deeply, completely. Chemical Weapons – horrible as they are – are the ‘WMD’ of 2013: a pretext for war. Think about it, now that Assad’s regime has allegedly killed Syrians with a particular type of weapon – it has trumped the hundreds of thousands of deaths by bombs, bullets and IEDs. So, its not Syrian deaths – but chemical weapons that are the bone of contention. But wait! Didn’t America provide Saddam with chemical weapons to fight Iran? Didn’t Israel use White Phosphorus on civilian areas in Gaza? Of course, none those are Muslim countries.

What any of these arguments brings is the ‘label of an Assad-sympathizer’. Binary labels are easy. And I get it too: Assad is an asshole and deserves to die! But that can’t (and doesn’t) blind the world to the duplicity and deception over US wars. Seriously considering Assad’s offer to destroy chemical weapons – is tantamount to sympathizing with terrorists. Pointing out the farce of funding Al Qaeda in Syria – is seen as anti-American, when it’s precisely the opposite. The question of what will happen if Assad falls – is not frivolous, but the most fundamental one. If a strike on Syria doesn’t diffuse a threat to US national security, doesn’t achieve any clear strategic objectives, doesn’t reflect the American people’s wishes, doesn’t change the chemical weapons situation, doesn’t keep down the price of oil, doesn’t strengthen US credibility in the mid-east, doesn’t weaken terrorist outfits, doesn’t shield ordinary Syrians from harm, doesn’t leave the country in a better (physical or administrative) shape, doesn’t install a secular democracy – what, one might ask, is the point?