Creationism and Evolution: What’s With All the Hoopla?

Many hold that Darwin’s understanding of Evolution contradicts Abrahamic traditions or vice-versa. In religions like Judaism, Christianity and Islam – an Almighty God is said to have created the Earth, universe and all species of life, including the first pair of man and woman. Evolution theories seem to claim that life emerged from prehistoric oceans and evolved:  single-cell organisms > reptiles > birds or mammals > apes > humans. Thus the Earth was populated with millions of species. 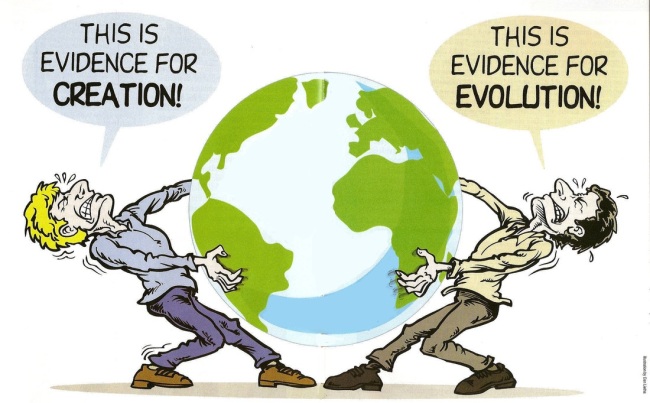 Are these two versions incompatible? I don’t see how (though there are plenty of ‘why’s). Okay, for example, say your grandmother had knitted a woolen scarf in 1940. In 2013, you examine it minutely and produce the following narrative: first it was just wool and then, yarn. Then the yarn got together with needles. The right needle went up through the loop on the left needle. Then the yarn was put over the right needle and twisted up onto the left needle. And then, the scarf was there!

Now that you’ve figured out how the scarf was knit – which of the following will you conclude / assume?

None of the above, right? Your description of the how the scarf came into being, while incomplete, is 100% accurate. And that granny chose the yarn, colors and sat down to knit – is also true. That’s how the Creationism-Evolution debate seems to me.

Abrahamic traditions don’t preclude evolution. In fact, the Holy Qur’an actually says that all life is made from water (the Science). Biogenesis is now scientific fact (Abiogenesis, rather, is speculative). As for evolution of humans from apes, it was never suggested by Darwin nor proven. But the Adam-Eve version is scientific. We now have evidence of Eve and a hypothesis about a Y Chromosomal Adam – both of whom lived between 160,000 to 120,000 years ago.

Science is observation / explanation / post-analysis of God’s work. No science precludes a God. In fact, often, it reinforces Him. Till we know more, I am happy to believe that Life, the Earth and the Universe aren’t what some have called a happy accident.